We may perhaps put this in perspective in the present case by saying that in the actions here recorded about twenty human lives were lost for, not every word, but every letter, in this book. Conquest quotes Vasily Grossman's essayistic-documentary novel Forever Flowing : "And the children's faces were aged, tormented, just as if they were seventy years old. And by spring they no longer had faces. Instead, they had birdlike heads with beaks, or frog heads—thin, wide lips—and some of them resembled fish, mouths open" 3, lives.

Do we need another book about Stalin? Don't we already know all about the Gulags, the terror, the show trials, the forced labour, the mass starvation that was the nightmare of Stalin's Soviet Union? Haven't countless articles, books and documentaries seemingly confirmed that the 20th century was defined by those evil twins: Stalin and Hitler, "the big moustache" and "the little moustache", as Martin Amis glibly puts it? Evidently not. Amis wants not only to remind us of the horrors of Stalin but to show that he was worse than Hitler.

But to what end? This book is not really about Stalin. It is Amis venting his spleen against all those intellectuals whom he thinks were foolish enough to identify with the Soviet experiment, but especially his writer father, Kingsley, and Martin's journalist friend Christopher Hitchens.

It is a dystopian polemic. Kingsley remained a member until - the year Khrushchev denounced Stalin. Kingsley was not alone. Thousands of his generation did so. After the Stalin revelations he became not only disillusioned but vehemently anti-communist. But the "congenital anti-communist" Martin is unforgiving: "There was no reasonable excuse for believing the Stalinist story," he says, citing the mutual friend of father and son, the redoubtable cold warrior historian Robert Conquest.

It was "self-hypnosis" and "mass hysteria". Amis jnr prides himself that, when he was 19, in , the year of the new Left, he entertained no hysterical illusions. Such lack of historical understanding as to why two generations of educated youth shifted to the Left in revulsion against Nazism and American carpet bombing is manifest throughout this book.

Martin is renowned as a writer. He is no historian. His study of "Koba the Dread", aka the "Man. But Amis cannot make sense of such brutality. The inherent contradictions of Stalin force-marching a backward, isolated, agrarian society into the industrial era in the face of an economically and militarily hostile world completely pass Amis by.

Instead, he misrepresents the Ukrainian famine of as a deliberate "genocide", "one vast Belsen" which "systematically" killed 6million, and trivialises it as a "Stalinist rush of blood". Horrific as it was, the Ukrainian famine was not the product of deliberate genocide but the consequence of ruthless grain requisitioning for industrial and military needs - not Holocaust extermination. We must cover this distance in 10 years. Either we do this or they will crush us," Stalin presciently declared in , a decade before Hitler's Wehrmacht blitzkrieged its way into Russia - only to be thwarted by Stalin's ruthless, breakneck-speed industrialisation, "the most precipitous economic decline in recorded history", we are falsely told.

Never let a few facts get in the way of a bad story. Invoking a kind of great tyrant theory of history, Amis is intent on demonstrating that Stalin eclipsed even Hitler as a mass murderer - imparting a sinister, totalitarian asymmetry to the barbarism of the modern world, which he simply reduces to the evil intent of "two antichrists", two "baboons" mooning each other across the River Bug.

Uncritical reliance on Conquest, undocumented sources and literary artifice are Amis's substitute for historical truth and analysis. Here Hitler's Holocaust comes into play. Amis somehow "feels" it is worse than Stalin's crimes, but Hitler's murder of nearly 6million Jews pales in comparison to Stalin's alleged "20million" - a nice round, undocumented figure 10 times the actual number Stalin had executed or that died in his Gulag.

No matter, when the Gulag is an "Arctic Auschwitz", a metaphor conveniently conflating forced labour with extermination. No matter that Hitler unleashed a war that took 27million Soviet lives alone.

No matter that Soviet troops fought and died with the cry of "Stalin" on their lips. Perhaps this was just "Russian obedience to the herd", as Amis would have it, though he also assures us that "Stalin knew the Russian people wouldn't fight for him". No matter that the Red Army vanquished Nazism - the reason Amis's dad felt obliged to become a communist. Are these the kinds of manipulation of history Amis has in mind when he writes, not unjustifiably, of Stalin's predilection to "break the truth"?

But why stop at Stalin? How about Lenin and Trotsky? Get rid of them and the whole Soviet myth comes unstuck, does it not? Amis certainly thinks so. Trotsky, Hitchens's erstwhile hero, was a "murdering bastard and fucking liar".

Not much nuance here. Stalin was "Lenin's most able pupil" - Lenin, architect of the "police state", rabid anti-intellectual, exponent of "terror", "slavery" and "war against human nature", the ultimate true believer who even "politicised sleep".

But Amis rips his Lenin out of the historical context. There can be no doubt that the Bolsheviks were ruthless - in ruthless times. The revolution aimed at a socialist Europe. Instead it got the congenital anti-communist Hitler, aided and abetted by Stalin who destroyed the old Bolsheviks in his terror.

These complexities of the Soviet experience completely escape Amis. Cynicism breeds intellectual indolence. Meretricious expression substitutes for thought: Stalinism was "negative perfection". I do, too.

Amis wants us once and for all to abandon utopia. He should be satisfied. The Soviet Union has gone - brought down not without a little help from religious fundamentalism. In place of secular utopianism have come a rampant global market and the despair of fundamentalist terrorism, spewed up by desperate forgotten peoples.

And in place of cold war, war against terrorism. Right now the world needs a shot of utopianism and some historical truth, not the paralysing cynicism with which Amis settles accounts with his "Father's Ghost". Roger Markwick lectures in history at the University of Newcastle.

Koba the Dread. The Sydney Morning Herald. To label Stalin's crimes worse than Hitler's is to pull everything out of context. License this article.

Koba the Dread: Laughter and the Twenty Million

In his superb memoir, Experience , Martin Amis almost casually expends a terrific line in a minor footnote. Batting away a critic he describes as "humorless," he adds, "And by calling him humorless I mean to impugn his seriousness, categorically: such a man must rig up his probity ex nihilo. Amis has won and held the attention of an audience eager for something very like this in reverse—a synthesis of astonishing wit and moral assiduity. Even the farcical episodes of his fiction are set on the bristling frontiers of love and death and sex. 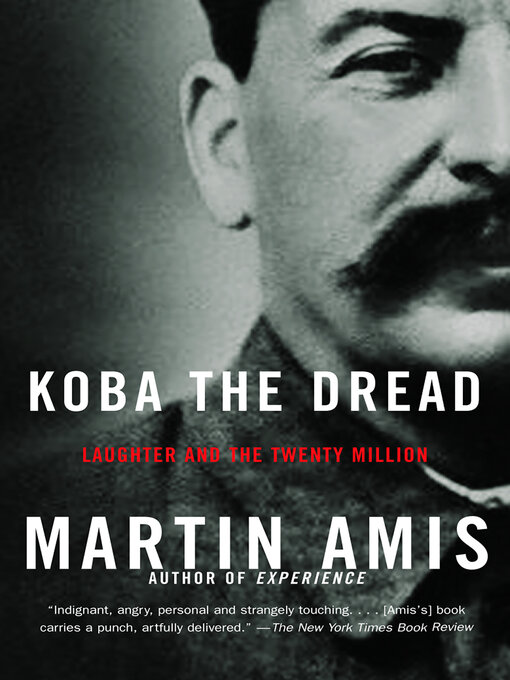 Why laughter? The second world war killed some 50 million human beings; the Bolshevik revolution and the Soviet state killed at least 20 million between and Stalin's death in Why is Hitler no joke, while the deeds of Stalin and Lenin can be subjects for humour as well as horror? In , Martin Amis went to a meeting in the Conway Hall. It was about "Europe" and nothing to do with Soviet crimes, but his best friend Christopher Hitchens was on the platform and at one point observed that he had spent many an evening in this hall with "many an old comrade". The meeting broke into knowing guffaws, and Amis found himself laughing too. Afterwards, he asked himself why Hitler "elicits spontaneous fury and the other [Stalin, "Bolshevism"] elicits spontaneous laughter".

The book is a study of the depredations of the regime of Joseph Stalin in the Soviet Union from the s to the s. The title alludes to Stalin's nickname "Koba", and the estimated 20 million deaths in the Soviet Union during Stalin's rule due to starvation, torture, gulags , and the purges and confessions of Stalin's Great Terror. The estimate of deaths under Stalin comes from Robert Conquest 's work, a key source for Amis. The book received a mixed reception.

Do we need another book about Stalin? Don't we already know all about the Gulags, the terror, the show trials, the forced labour, the mass starvation that was the nightmare of Stalin's Soviet Union? Haven't countless articles, books and documentaries seemingly confirmed that the 20th century was defined by those evil twins: Stalin and Hitler, "the big moustache" and "the little moustache", as Martin Amis glibly puts it? Evidently not.

Any cookies that may not be particularly necessary for the website to function and is used specifically to collect user personal data via analytics, ads, other embedded contents are termed as non-necessary cookies. It is mandatory to procure user consent prior to running these cookies on your website.